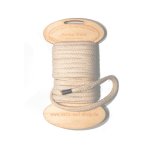 Cotton is a vegetable textile fibre that grows around the seeds of the cotton plant, a shrub of the genus Gossypium, which belongs to the Malvaceae family and is native to tropical and subtropical regions.
There are several native species in America, Africa or India. Cotton is the most important natural fibre in the world, its importance began in the 19th century with the process of industrialisation and still accounts for almost half of the world's consumption of textile fibres.
Not all species of the genus Gossypium have commercial value, the fibres are obtained from the seeds of some species, the length and thickness of the fibres depend on their origin.